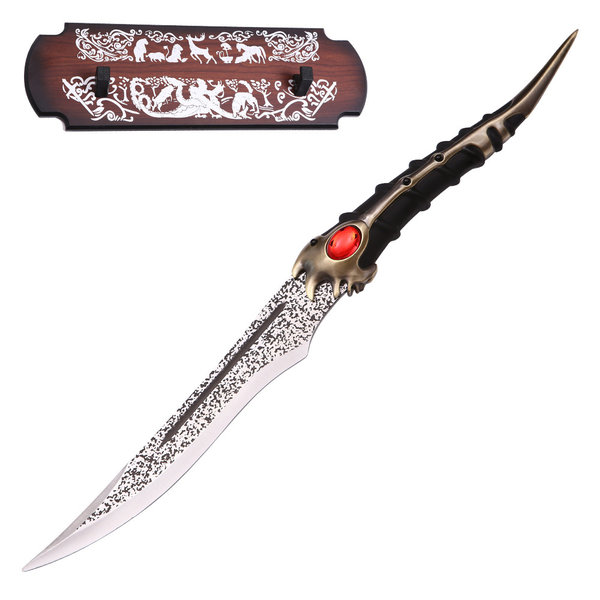 A blade that Catelyn Stark recovered from the assassin sent to finish her son Bran. It was taken to King's Landing by Lady Stark and shown to Petyr Baelish, who identified it as belonging to Tyrion Lannister.

Years later, Petyr Baelish presents the  steel dagger to Bran at Winterfell. Bran asks Petyr if he knows who the dagger belongs to, to which Petyr replies he does not. Later, Bran, Sansa and Arya discuss the dagger and the cutthroat who wielded it, they are all perplexed as to why Baelish would give the dagger to Bran. Bran states 'someone very wealthy wanted me dead' and hands the dagger over to Arya as it would be 'wasted on a cripple'

- Length: +/-50 cm
- Material: Steel
- All swords purchased from this shop have dull blades.

I was a bit cautious about ordering where I had not heard of the site, but after reading other people's positive comments I thought it was worth taking a chance. I'm glad I did! Delivery was very fast to the UK. After ordering the dagger I emailed to ask when I should roughly expect my order, to my surprise I had a reply within two hours! Cannot praise their customer service enough!

The dagger is lovely and has a good weight to it! I will definitely order again off this site, would definitely reccomend!

Never heard of this site before but I brought this dagger and I will definitely be buying more from this site.

Dagger looks nice and I appreciated the little thank you note, very nice.

Delivery was really fast to the UK and the quality was definitely up to standard. Will be an incredible display piece for me to show off. Stand slightly crafted wrong but easily fixable.