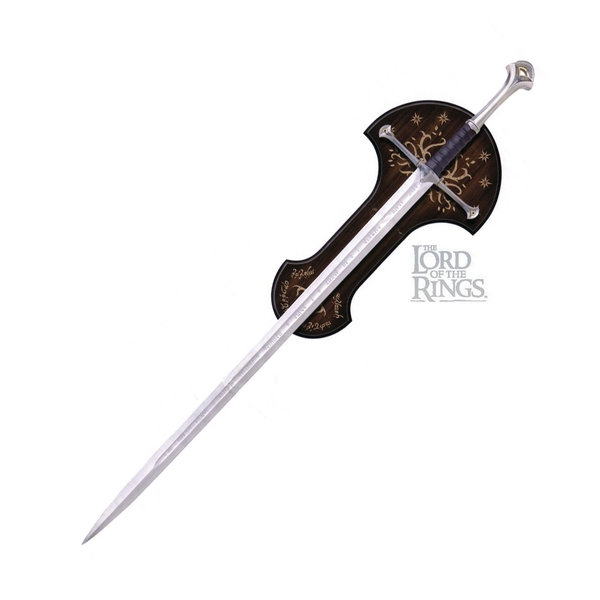 Narsil™/Anduril™ are perhaps the most famous swords in The Lord of the Rings trilogy. At the end of the second age of Middle-earth, Narsil´s blade was shattered, as Elendil fell during the Last Alliance of Elves and Men in the great battle against Sauron, creating the Shards of Narsil™. Isildur, Elendil´s son, then used the broken hilt of Narsil™ to cut The One Ring from Sauron´s finger, breaking the bonds of his power, banishing his evil shadow into the darkness. The Shards were kept in Rivendell, the house of Elrond, for safe keeping. Legend told that the sword would one day be reforged and the king would return.

In the New Line Cinema film, The Return of the King, Anduril™ was reforged from the Shards of Narsil™ for Aragorn by elvensmiths in Rivendell. Elrond said of the legendary blade, The man who can wield the power of this sword can summon to him an army more deadly than any that walk this earth. The inscription down the length of the blade on both sides is in the Tolkien language of Quenya, written in the runes of Eregion, that say N‡ny‘ Andœril i nŽ Narsil i macil Elendilo. Lercuvanten i m‡li Mord—r‘o. This translates to I am Andœril who was Narsil, the sword of Elendil. Let the thralls of Mordor flee me. The blade inscription features runes framed by stylized symbols of the Sun and the Moon, which represent An‡rion and Isildur, the sons of Elendil, and seven symbolic stars that represent Elendil, who died wielding Narsil™ in battle against Sauron. Inscribed on the pommel are runes in the Elven language of Sindarin that say Narsil essenya, macil meletya; Telchar carneron Navarotesse. This translates to Narsil is my name, a mighty sword; Telchar made me in Nogrod. 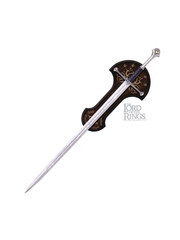