LORD OF THE RINGS - Sword of Aragorn - Strider

Strider was one of the mysterious Rangers of the North, feared and distrusted by the folk of Eriador because of the Rangers grim appearance and nomadic lives. However, the Rangers protected these same people from the forces of evil. Strider was in fact Aragorn, the heir to the crown of Gondor. This sword is the plain battle sword he used while on his missions against the agents of Sauron.

- Replica sword from the movie Lord of the Rings, Strider from Aragorn
- Little knife included
- Length: +/- 130 cm
- Material: Metal, Stainless Steel
- All swords purchased from this shop have dull blades and are for decorational purposes only

Fantastic quality sword for the price and amazing service. Was searching for a good looking Strider sword as the United Cutlery one has long been sold out. Look no further than here. many many thanks to team Otaku!

This is the one sword I have always wanted since seeing LOTR many years ago and it is soo beautiful.will buy the dagger next!

Thank you OTaku.
This will be awesome for my boyfriends cosplay 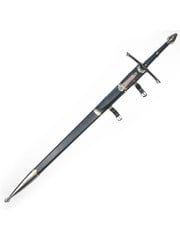