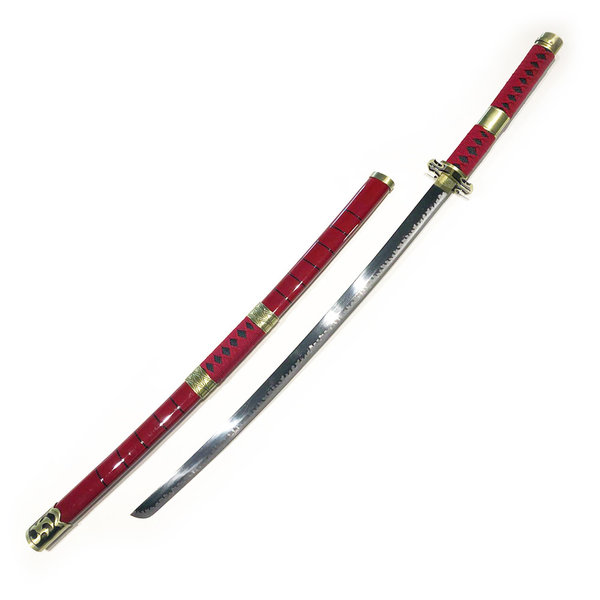 This version 2 of Zoro's Sandai Kitetsu features a whole new blade, which looks exactly like it has been seen in the anime/manga

The Sandai Kitetsu is one of the Wazamono grade swords, a "Sharp Sword". Like all of its predecessor Kitetsu swords, this one is said to be cursed.

Zoro picked the sword from a barrel of cheap katanas in a shop at Loguetown after sensing its quality; Tashigi later identifies the sword from a catalogue. When the owner first saw it, he was not going to allow Zoro to buy it, telling him of the curse. Zoro liked the concept and decided to test his luck against the curse. He threw it into the air and held out his arm, willing to let it cut his arm off. Zoro's luck won and the blade circled neatly around his arm. The shop owner gave Zoro both Sandai Kitetsu and Yubashiri for his skill and luck.

The scabbard alone is a sight to behold. It is made of rosewood and has a red color with black rings at intermediate intervals. The middle of the scabbard is decorated by aluminium fittings and a nylon wrap over black ray skin. This is sort of like another handle in the middle of the scabbard which makes opening the sword a lot easier and safe. The guard is all steel with a gold coloring. The blade is a handmade carbon steel construct with a dual tone coloring to boot. The handle is red nylon wrapped over black ray skin. It even has the pivoting hook at the end just like the real thing.

- Length: +/-103 cm
- Material: Metal, Steel
- All swords purchased from this shop have dull blades and are for decorative use only.

My favorite sword of the 3, came well packed as expected. Sword is solid aswell, not like the crap you find on Ebay. I'm glad shops like this still exist. You got my support!

Delivered quicker thanks expected.
Amazing katana, i am very satisfied 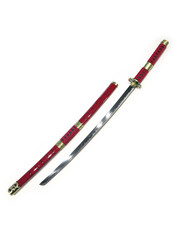